The tributes' pedestals circle a garden, where the gleaming gold Cornucopia rises amidst neatly trimmed hedges and flowers. The little garden is an anomaly, groomed and tidy. All else is ruins. Just outside the mouth of the Cornucopia, surrounded by the supplies, stands a statue of a man and a mouse. And beyond it, outside the circle, a castle overlooks them all. Tall and ornate, it has a fairy-tale look to it, and though one tower hangs askew, the building is scrubbed, clean and pink and blue. The bridge leading to it is framed by rotting, tattered flags.

In the opposite direction, a broad road made of broken bricks runs between two rows of buildings, their fronts all tightly boarded up. Their architecture is strange. The ground floors are all of normal size, even grand. But their second stories are half that scale, and the highest half that again. The road ends at a train station, perched on a berm above the little parody of a town's main street, with blocked tunnels beneath it. There's no sign of a train, but beyond the tracks is a high, black wall. A wall that encircles the park.

Breaking into the boarded-up buildings that line this road may be worth your time.

West of the Cornucopia, through a gateway of fake stone formations that still glitter in the everpresent sun, past a toppled tangle of gold machinery that could have been a massive orrery, is a long, twisting plaza between massive, blue-silver buildings with fin-like spires. Shattered neon tubes are everywhere. A monorail track curves through the space, its train, red faded to pink, derailed and crashed into an old stage, wire tables and chairs scattered everywhere in the wreckage. Scores of little, two-man cars are tumbled together near a twisted track full of collapsed bridges.

On one side of the plaza, a toppled rocket ship nearly blocks the way to an immense, mountain-shaped building topped with needle-like spines, a ramp leading into its core. Strange noises come out of it, day and night; snatches of music and a low, intermittent rumbling.

Inside the remains of Space Mountain, a lone car is still trying to run, rocking mechanically against its brakes. Maybe someone can rock it loose? But how much do you trust the track?

Right behind the Castle is a space that resembles an old fairground. A merry-go-round is there rusting into a heap, its horses all askew, their peeling paint making them look leprous. There are decaying murals everywhere, where the walls have survived at all. Not all of the buildings are whole. One looks to have exploded, revealing an inner labyrinth of panels in weird, faded colors, little fiberglass buggies overturned everywhere. The roof on another has collapsed, exposing broken little ships and a plastic island to the sky. Shops and restaurants molder, merchandise and trays strewn about their doors. There is still food rotting behind the counters, strangely.

A train lies on its side, over watched by the gaping map of a cement whale. A building of white and gold clockworks has been overrun by what once was topiary and shrubberies, though its canals, long dry, still lead into the dark interior. Overlooking that, a mountain of tangled rubble and rusted iron sprouts trees.

Inside the clockwork building, thousands of dolls watch the dry canal, the abandoned boats. But not all of the eyes are dolls, and none of them seem benign. The muttations here look like round-faced little children, but with grasping claws and broad, horrible mouths full of big sharp teeth. They attack in swarms.

Under the train tracks at the northernmost edge of the park is the entrance to perhaps the strangest part of the arena. The buildings are all bulbous and deformed, the wild colors all long faded to browns and ugly, crusty reds. One of the houses is filled with soft rubbery panels, lining the walls and floors. It might appear a tempting place to sleep.

More muttations up here. These will not wake until the first night someone sleeps up here, but once they do... There are five, all more than six feet tall and massive. Two rats, bipedal, with huge blackened ears and round white eyes. One wears a pair of tattered red shorts, the other a decrepit polka-dot dress. A dog, taller than seven feet on its hind legs, wears a green vest and an orange hat. A duck with molding, rotten feathers wears a blue sailor's shirt. And a black rabbit with a scarred white face and one ear, wearing blue shorts. They all have three things in common: the jagged teeth of a deep sea fish, the long, curved claws of a bear, and they will follow you.

Rustic is the best way to describe this zone. Peeled logs make the fences and handrails, at least half of them collapsed now. There are crates and barrels everywhere, but they're mostly empty props. A shooting gallery's roof has fallen in, but its guns are props too.

What aren't props, though, are the weapons scattered here and there in the scenery, propped in amongst the wild plants and set pieces. Swords and axes, hammers and a long spear or two.*

There's another train gone to ruin here, wound in and around a big fake mountain of red cement. Rotting fake animals stare with missing eyes and torn skins. A goat's head lies on the tracks, wires trailing from its neck.

Hunting around inside the big fake mountain, be careful where you step. If the unstable dynamite hidden among the props there doesn't blow you up, maybe you can use it.

Overlooked by a towering, cement tree with tattered, half-melted leaves, this zone is dominated by a marshy swamp that has overrun its sculpted banks. What looks to have once been a ferry landing, albeit one carved out into narrow lanes by well-worn handrails, stands in knee-deep water. A half-dozen little boats are sunk just off the dock, their metal canopy frames still above the water, draped in moss. Anyone exploring into the swamp will find more decaying man-made animals, and and caricatures of people too, all so far rotted as to be skeletal, moss-draped monstrosities.

Just west of the swamp is a pyramid, its peak blackened. The tunnel that leads into it is unlit and dank, lined with bampoo poles that are actually plastic over steel. This is at least made to resemble a ruin, but only the first stages of decay are deliberate. Deep inside, five jeeps sit on a track, immobile and unmovable. The track leads through a series of doors into a tunnel leading down, and ends in black, stinking water. But what is that hissing?

The ripples in the waters of the swamp are nothing friendly. The piranha muttations are always watching for wading feet. And down inside that ruined ruin? Giant snakes swim the black water and crawl its tracks and stages, eager to pull you down.

In the westernmost corner of the arena, a broader, deeper body of water holds the hulks of two sunken ships. The sailing ship lies on its side, its bow impaling the boxy steamship wedged cockeyed up on the bank. A tribute with sure footing might cross the mess of slanted decks and tangled, decaying rigging to the island in the middle.

Along the far shore of that water, elegant, antebellum buildings sag like abandoned wedding cakes around a plaza cratered by some percussive damage. A little lane of elegant shops looks to have been the victim of some past inferno, leaving only the wrought iron frames of the windows intact. Through one entrance, past a small forest of waist-high brass poles still bearing the rotted remnants of velvet ropes, a subterranean canal still flows, ancient machinery clanking deafeningly as it sends an endless of barges through, their empty seats all damp with spray. Is that a voice echoing up from beyond the first of its waterfalls?

Just past the range of the long-ago blaze, another elegant house sits apart on a hillock, surrounded by graves. Its doors hang loose, and inside, a broad, round shaft yawns blackly.

Past the mansion, a road leads through a massive thicket of real plants intertwined with fake ones. Noise drifts from somewhere, a repetitive, jangling tune that never seems to resolve into something one could call music. The road ends at yet another false mountain, and a dry canal, log boats sitting askew in it.

Somewhere in here is a muttated bear, its yellow fur and red shirt long stained with something awfully dark. Down in the darkness where the plastic barges float, blind white sharks patrol the water, swimming in and out of the fake wrecks above real and unreal bones. And that ornate mansion in its graveyard? Huge webs line the tunnels beneath, with their obligatory occupants.

In this arena, certain areas have powers. They are listed below:

Power that were created through technological advancement will work here. Steve, Bruce, etc.

Powers that were created through natural development. Copy Cat, Gaila.

The Cornucopia is your first, most important resource. Around it are scattered the available resources:

Not at the Cornucopia, at any rate. You will have to look elsewhere.

Note: The canned food this arena tends towards the high-end. Pineapple is the most common by far. Salmon instead of tuna. There may even be caviar. There is definitely soda.

Each district is in matching, color coded attire shown above. The ladies have wool stockings and a slip underneath, and both have leather boots and woolen capes. 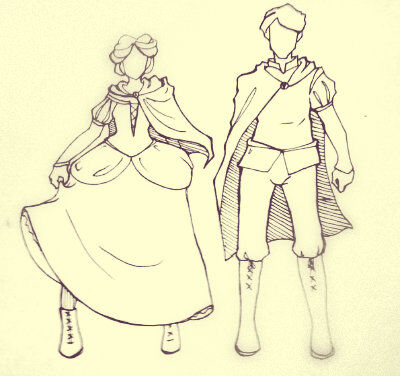 In Tomorrowland, all of the landscaping is food-producing. There are orange trees, wild corn just now coming ripe, tomatoes a little past their prime, wild carrots, and blackberries running wild.

And of course, you can always eat the cats. And the ducks. And the rats. If they don't eat you. 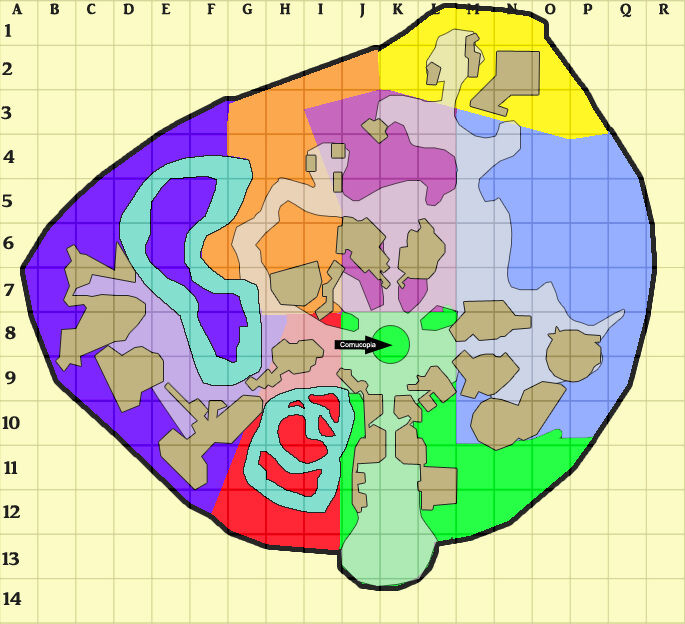 Retrieved from "https://thegamesrp.fandom.com/wiki/Arena_06?oldid=5179"
Community content is available under CC-BY-SA unless otherwise noted.