This arena is not a warm paradise. A thickly-forested canyon leads to a ruined structure situated on a rocky cliff-side constantly pounded by harsh waves. Here, the ocean air is cold and damp, and thick fog is present from nightfall and lingers on until the harsher light of mid-morning finally burns it away. But even in the daylight there is a chill damp that settles into everything and the only shelter from it appears to be inside the ruins.

And they are impressive ruins. A heavy shell composed of metal and concrete still stand protective over a stone building of several stories, and the Cornucopia itself sits right within the confines of that shell. Although the shell appears to be relatively intact, the surrounding remains of what must have once been other buildings themselves suggest that the combination of time and constant erosion have taken their toll on the area.

Inside the protected building are several large, open processing rooms, and what appear to may have once been offices, labs, hallways, break rooms, etc. The deeper you get in the darker it is, and although the rats, the ocean, and time have taken their toll, it's clear this place was left in a hurry. In some places the walls are coated with a thick black mold that glows, sometimes brightly, depending on how much there is. Nice to see by, but you probably don't want to risk touching it.

Outside of the ruins, a canyon leads away from ocean and the gentle sea grass, up into a rich forest. There is evidence of the forest having overrun more buildings that once stood here, but now only their ghosts linger as cement slabs and piles of bricks. The forest is abundant with multitudes of animals; finding food won't be hard this arena. But something is just a little wrong with all of these animals...

There is some small amount of access to the ocean, but it is not easy to get to, and then only at low tide. The water is rough, and equipment from the building, whatever it was, litters the area. Submerged material is a serious danger, as is being caught at the bottom of the cliffs at high tide.

At night, however, something out in that water glows. If the air is clear it is beautiful and surreal, in the fog it is eerie. And when the fog works its way into the glowing passages of the building, it's even worse.

The Cornucopia is your first, most important resource. Around it are scattered the available resources:

Shelter is available within the ruins, but although some supplies may be found in the many crumbling offices and rooms within, it is not recommended to use them. Canned beans don't taste so good after a few decades.

Although dry wood would be hard to find outside, there is enough still inside to keep you warm. If you can find something to light, it lights surprisingly easy and burns warm and long.

Fresh water can be found in small streams in the woods and through the canyon.

There is an abundance of wildlife in this arena. Many of the animals have mutations such as multiple limbs or discolorations.

All of the above animals could be killed and eaten with the right equipment, and the birds' nests are ripe for raiding. In addition, as mentioned above there is limited (and risky) access to the ocean at low tide if you are in the mood for sea food.

There is also edible flora around, but just as in any forest, be careful which you eat. Poison berries, mushrooms, and all sorts of unpleasant things litter the area. 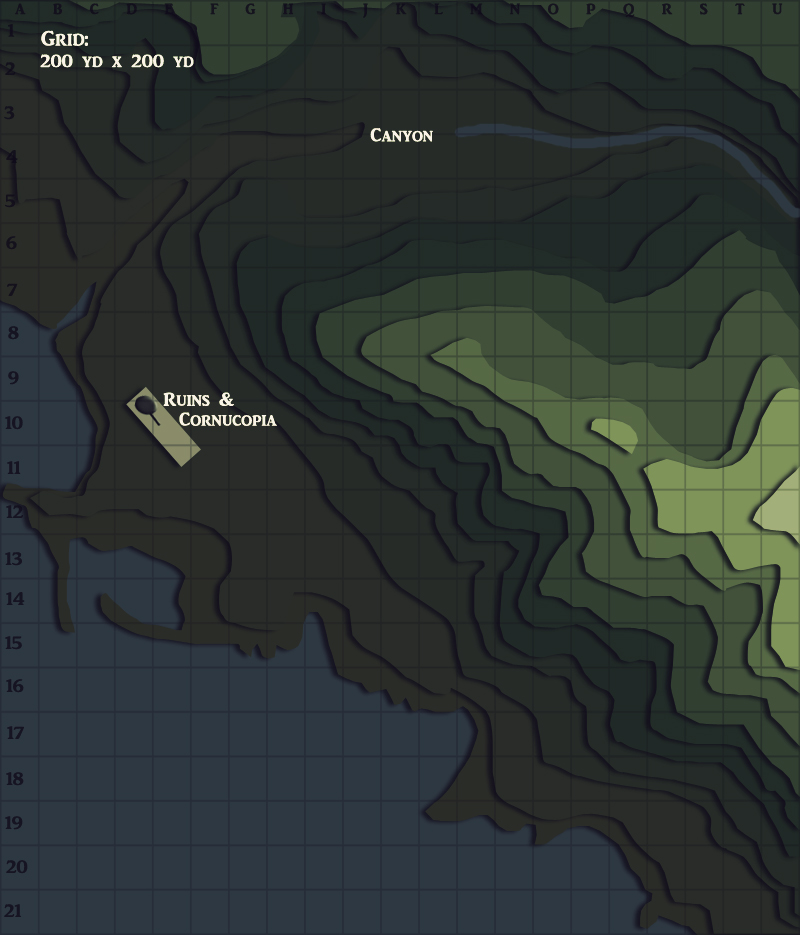 Retrieved from "https://thegamesrp.fandom.com/wiki/Arena_04?oldid=4914"
Community content is available under CC-BY-SA unless otherwise noted.