It’s sunrise, but no sun is visible. The sky above the inlet is delicately pink and silver, but only an indistinct, blue pre-dawn reaches down because the towering mountains, deep into this water-floored canyon.

The Cornucopia is set on a beach, with mud and gravel underfoot. The first thing to notice is the sound; the nearby waterfall is deafening, a massive white torrent close enough that spray billows around the tributes, condensing in hair and clothes. The massive golden horn, twice the height of any of the tributes, is set in the middle of the knee-deep run-off stream, surrounded by the supplies available to them. Weapons gleam in the water, and cans of supply. Waterproof bags float despite being fully loaded, already beginning to move downstream. Hurry to get them; they don’t have far to go to the cold, milky water of the sea and it’s a very, very cold swim.

Above the beach, the forest starts immediately. Towering cedars and firs hung with ancient moss, thick thickets of thorny undergrowth, overgrown ferns all make it harder to see more than a few dozen yards in any direction. Water is everywhere; dripping from the foliage, running down the rocky ground, saturating the omnipresent moss. You can’t go a hundred yards without crossing a stream, cold as ice, milky white, and barren of life. Waterfalls abound. Don’t worry, it’s safe to drink. It’s fire that will be rare here. Finding dry wood will be hard, and by the time you get anything lit, it’s probably going to be raining.

The forest is a steep world. The only flat land at all is the beach. From there, it rises steeply up towards the sky, a direct slope up to the snow-line at three thousand yards, the peaks white and dangerous above. There are cliffs to watch out for, sudden precipitous breaks in the mountainside that rise above the sea of trees, soaring walls of stone. Landslide scars streak their faces, freshly-broken stone bright against the older facades, and piles of rubble slope their bases.

Days here are short. The sun doesn’t climb above the high surrounding mountains until nearly noon, and disappears on the other side barely six hours later. The walls of the inlet hold heat well, but the nights get cold, especially to those sleeping near any of the dozens of ice-water streams.

Unfortunately, it stands on a tide flat. One hour after the starting gong, the rising tide will scour it empty, sending everything left behind out into the ocean. 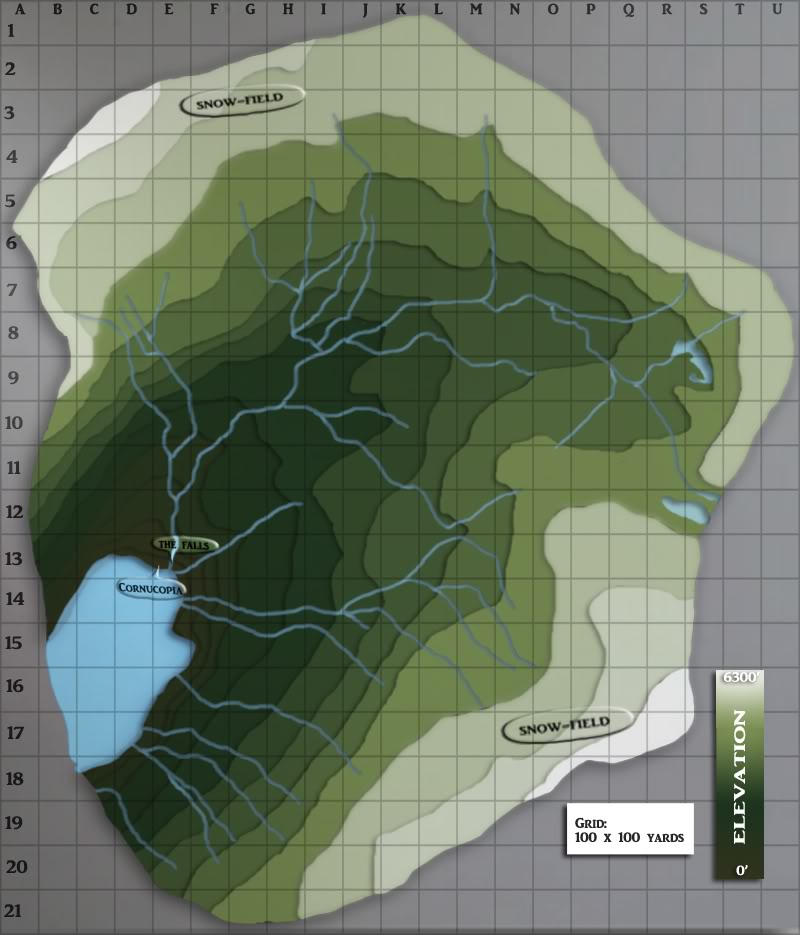 Retrieved from "https://thegamesrp.fandom.com/wiki/Arena_01?oldid=7280"
Community content is available under CC-BY-SA unless otherwise noted.