Dr. Grey is an original character from a story. He is munned by Dark. 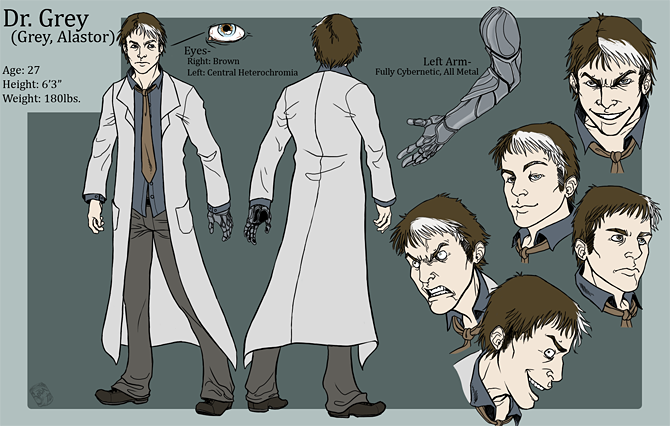 Grey's typical disposition is more than enough to unnerve most people. He seems to shift between quirky and odd (often coming across almost overly cheerful to the point of seeming manic), detached and stoic, and violently aggressive. His mood and facial expressions are prone to rapid alterations. He's quick tempered and impulsive, sardonic and sarcastic, and his sadism is no small thing.

Having grown up at home and at the research facility, Grey had little need to form a mask personality in order to appear 'normal' and integrate himself with society. So he never bothered. Human social interaction and social norms are still largely a foreign concept for him. He tends to be completely oblivious to a lot of social cues and body language.

Grey's quick temper, impulsivity, and obliviousness to social cues and human nature tend to lead people to believe that he is of average, if not below average intelligence when he is actually rather well above. Particularly when his impulsiveness comes back to bite him in the ass (as it often does).

It's a rare occurrence to catch sight of Grey out of his work clothes. He usually wears an un-tucked button up shirt with a tie, a long lab coat, slacks of a neutral color that tend to be just a little too long for him (they tend to bunch a little around his shoes), and black or brown shoes.

Dr. Grey was born Alastor Grey in Okinawa, Japan to Phenex Grey and Gibrielle Lorentz, both of whom were from very well off families. Phenex and Gibrielle were fairly young when they got together and, eventually, moved in together into their own house. Phenex began to get into science as a career and soon became a fair bit obsessed with it, changing drastically from how he was when Gibrielle had met him. He began to spend more time in his basement lab than anything else, eventually even kidnapping and bringing home people to test on. Gibrielle, still very much in love with him, turned a blind eye to it all.

Eventually Gibrielle became pregnant with a boy. Phenex was in great opposition to the child being born, but Gibrielle would hear none of it, eventually birthing the child and naming him Alastor. Phenex became even more reclusive, preferring to pretend his son didn't exist (ignoring him entirely and/or never referring to him or calling him by name) and rarely even venturing up from the basement anymore. At this point he'd also begun conversing with other likeminded scientists. The start of plans for a facility that would work on human research subjects began, and eventually these scientists, along with Phenex, went on to create it. They became the head scientists, appointing many others under themselves and dividing the facility into various wings for different research.

Grey's mother became increasingly wary of Phenex and his involvement in the research facility and, as things began to fall apart between them, she considered taking Grey and leaving. Phenex attempted to keep her with him in every way possible, seeing as she knew far, far too much by now. Gibrielle died suddenly, and very unexpectedly, of a massive heart attack when Grey was seven years old. Grey found an empty vial of insulin in his father's bedroom drawer shortly thereafter, strongly suggesting that his father had been the culprit in her death. He learned to take care of himself, living in fear that his father would find him a burden and kill him as well. Grey ceased to use his first name (seeing as his mother had named him and his father never called him by anything, rarely even acknowledging his existence anyway) and never told it to anyone again, often harming or getting into fights with anyone who knew it and dared to refer to him by it. Although Grey had grown up at this point with his mother's guidance, he'd also taken an early interest in his father's work despite his dislike of the man. If Phenex acknowledged Grey at all in his mind, it was perhaps to take some pride in the fact that his son had taken to science from an early age.

At the age of twelve Grey got his first visit to his father's work place, getting a peek at the first subject, born of a surrogate mother, in the A wing which dealt with mental prowess. The B wing (physical prowess) was still in construction at this time. Grey was visiting his father's work place regularly by the time he was fifteen. The B wing was still under construction, but the A wing now held two test subjects. The original (Ryosuke), and a psychic boy named Alex who had actually sought out the facility and volunteered himself. Grey strongly disliked the other boy, who constantly felt the need to predict everything that would happen to him on a daily basis. Between this and a prior unsavory experience as a child, he found that people with powers of the mind made him feel vulnerable and exposed, and thus he grew a strong dislike of people with these powers. Grey eventually killed Alex when the other boy crossed a thin line.

Eventually, he began to work at the facility himself. He quickly rose to the top among the scientists, with only one thing in his way of the position as one of the leaders. His own father. At the age of nineteen, Grey trapped his father in with a biochemical weapon the man had been working on and set it loose on him, effectively killing him and taking his position. The B wing had been finished by now and Grey took over his father's work with it's first subject who, after refusing to give him a name, he dubbed Spider.

After working on Spider for a while he took on a new project. Whereas Spider was an experiment in physical enhancement without synthetic materials, Grey was now focusing on both as he created a female android named Althaea. At some point a female scientist named Arlene, who had tried to join the facility and then attempted to back out when she saw what went on inside, (normally such people were eliminated) escaped and alerted authorities to it. The government attempted to shut down the facility, resulting in chaos as test subjects and scientists fled. Having only managed to keep Spider at his side while escaping, Grey's main goal was now to recover his android experiment. Arlene took in fleeing test subjects and formed a resistance as the scientists regrouped in an attempt to reclaim their most prized project.

Grey's heterochromia (mismatched eyes, the blueish one with brown in it particularly as his eyes were originally both fully brown), bits of white in his hair, and missing limb are all a result of an explosion (set up by the resisting test subjects). It'd have been worse if another scientist hadn't tried to shove him out of the way and thus taken the brunt. He quickly sets to work creating himself a mechanical replacement for his lost limb.

In the end the fight is lost and Grey barely escapes unscathed with Spider alone. Spider and a simple basement lab are now all he has.

Retrieved from "https://thegamesrp.fandom.com/wiki/Alastor_Grey?oldid=5617"
Community content is available under CC-BY-SA unless otherwise noted.